Russia invades Ukraine
It's 6 p.m. in Kyiv. Here's what you need to know
As night falls on Saturday in Ukraine, these are the latest developments in the war:

Zelensky tells Russia "it's time to talk": In a video message early Saturday, Ukrainian President Volodymyr Zelensky said the Russian military's actions were worsening the situation for their own country, and that honest negotiations "without stalling" were the only way to mitigate the damage.

Status of forces: Russia has so far been "surprised by the scale and ferocity" of Ukrainian resistance and has been "forced to change its operational approach," the UK Ministry of Defence said in its latest intelligence update on Saturday.

While Russia continues to make "incremental gains" in Ukraine's south and has used "brutal, savage techniques'' in the way it has targeted civilians, US Secretary of Defense Lloyd Austin said Saturday.

Rescue operations underway: Rescue efforts are taking place in Mykolaiv on Saturday morning at the scene of a missile strike on a barracks housing soldiers, regional boss Vitalli Kim said. Dozens of troops are reported to have been killed in the attack by Russian forces, according to journalists from CNN Swedish affiliate Expressen who were at the scene.


Approximately 1.5 million children have fled Ukraine since Russia’s invasion began and are at risk of being trafficked, according to UNICEF, the United Nations' children's agency.

“Countless others” are displaced inside the country as the war wages on, the agency said in a Saturday news release.

“The war in Ukraine is leading to massive displacement and refugee flows – conditions that could lead to a significant spike in human trafficking and an acute child protection crisis,” said Afshan Khan, UNICEF’s regional director for Europe and Central Asia.
“Displaced children are extremely vulnerable to being separated from their families, exploited, and trafficked," Khan continued. "They need governments in the region to step up and put measures in place to keep them safe.”

To scale up protection, the UN and civil society partners have set up information hubs in neighboring countries such as Poland, identified as “Blue Dots” to provide essential services for families.

UNICEF also urges Ukraine’s neighboring governments to scale up child protection screenings at the borders and at key areas, such as train stations, where refugees pass through.

“In addition, UNICEF is calling on governments to improve cross-border collaboration and knowledge exchange between and among border control, law enforcement and child protection authorities and to quickly identify separated children, implement family tracing and reunification procedures for children deprived of parental care,” according to the statement.


US officials confirmed to CNN that Russia launched hypersonic missiles against Ukraine last week, the first known use of such missiles in combat. The US was able to track the launches in real time, the sources said.

The launches were likely intended to test the weapons and send a message to the West about Russian capabilities, multiple sources told CNN.

Russia's Ministry of Defence said Saturday that it had launched hypersonic Kinzhal missiles against a military ammunitions warehouse in western Ukraine on Friday, destroying the structure in the Ukrainian village of Delyatin. CNN is unable to independently verify this claim.

The Pentagon has made developing hypersonic weapons one of its top priorities, particularly as China and Russia are working to develop their own versions. 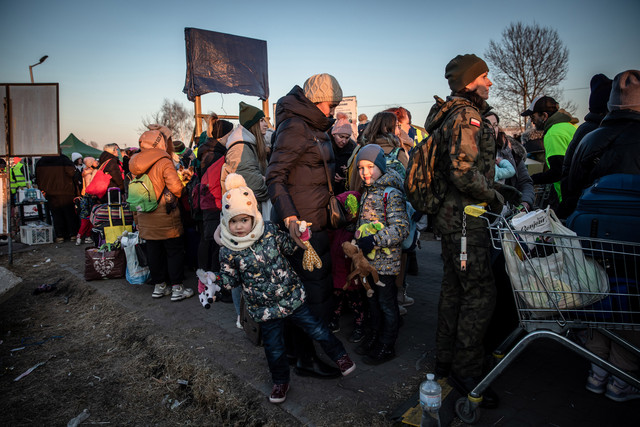